This apparent early purchase by the US companies was to avoid higher tariffs later on. Latest data suggests exports to the US have declined by 3.7 percent YoY.

The steep decline in China’s trade numbers corroborates a story which leading indicators (in this case PMIs) and WTO’s trade outlook had been pointing towards –a global growth drag on account of the Sino-US trade war and a China domestic slowdown.

China’s export dropped 4.4 percent year-on-year (YoY) compared to 5.4 percent rise in the previous month. Interestingly, previous readings (September-November 2018) brought out near double-digit export growth for China but this was mainly aided by higher exports to the US. This apparent early purchase by the US companies was to avoid higher tariffs later on. Latest data suggests exports to the US have declined by 3.7 percent YoY. 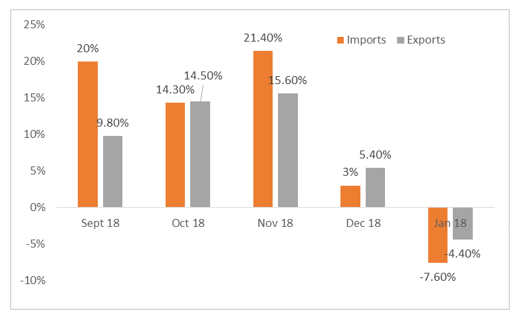 China’s imports declined even more severely i.e. -7.6 percent YoY conveying a mix of an impact of trade war (pre-purchase) and domestic slowdown. Imports from the US to China dropped by -35.8 percent YoY.

What does it imply?

Chinese authorities are expected to target a revival in consumption, improve the credit situation and offer a calibrated approach to reduction in debt so that growth in minimally hampered.

Recently, the Chinese authorities have tried to tweak personal income tax slabs to increase disposable income. At the same time, incentives for the SME sector have been targeted so that employee layoff is avoided. PBoC (the central bank) has taken steps to reduce the reserve requirement ratio (RRR) for banks by 100 bps, this month, to provide liquidity support.

But these steps may not be enough and more is expected before domestic growth shows signs of improvement.

This may act as a catalyst for the US-China trade talks so that reprieve in external sector partially offsets the domestic slowdown.  In fact, the factor that can push both China and the US to the negotiation table for a solution is global growth moderation. Global central banks have recently highlighted this and the last being the Federal Reserve. From China’s perspective, it’s noteworthy that China’s industrial profit cycle has largely been, aided by firming global demand and China's supply-side reforms. And hence, any weakness in global demand may moderate the profit trajectory further.

What next to look up to?

On trade negotiations, the detailed outcome of the first round of trade talks is still not out but the US statement suggests China has agreed to substantial purchases of agriculture, energy, manufactured goods from the US. Such initial outcome was widely expected and had been highlighted in the Xi-Trump truce in the backdrop of G-20 meet in November 2018. It’s noteworthy that China’s surplus with the US is at a record high of $323 billion in 2018.

Further, progress on contentious issues like technology transfer, intellectual property protection, non-tariff barriers and cyber theft are eagerly awaited and can potentially emerge as the Achilles heel for the entire negotiation. It is no secret that the US considers its technological prowess under threat due to China’s endeavour to leapfrog in the high technology areas. China in its “Made in China 2025” plan has kept domestic technology as the cornerstone of the strategic plan.

Next round of trade negotiation is expected to happen later this month wherein the Chinese side would be led by Vice Premier Liu He.

The sequence of events gets interesting as China’s communist party plenum (19-22 Jan’19) is also around the corner. This is important as traditionally major reforms are announced in such events which may point towards more opening of the Chinese economy.

Subscribe to our Daily Newsletter
Get Daily News on your Browser