Sticking to winners…as seen in the rear view mirror…

Equity markets are witnessing polarised behaviour. While Nifty50 is at its all-time highs, broader markets encompassing small and midcaps are ~40% and ~23% lower from respective peaks. This is causing individual investors to feel aggrieved because they have exposure to broad markets where they have lost money, albeit it’s just for now, while the “market”, as they willy-nilly call the Nifty is at all-time highs.

Recent data released by the association of mutual funds in India and anecdotal discussions with PMS and AIF managers suggests that investors want to invest and are investing mainly into largecap and multicap funds only – the latter again being 70-80-90% in large caps right now! The love affair of 2016-17 with mid and small caps has come to an end….for now...but how! I have met and spoken to numerous clients who invested consistently in their mid and small cap funds until the values were headed up and then the moment the value declined they stopped investing; wonder what the systematic investing was about! Now incremental allocations are going only to large cap…i.e. presumably until their values are heading up.

Being a practitioner in the industry for nearly 20 years, it is a matter of frustration to see how investors and even intermediaries – distributors and advisors alike – while deciding to invest, look at recent past returns to guide where they should invest for the “long term future”. In my understanding this behaviour comes from:

1. Lack of clarity of what “performance” means – of course it means returns delivered or multiples of capital invested – but delivered performance is very different from how performance is measured – is it an absolute number in returns terms, is it relative to benchmark index or the operating context like large cap compared to large caps etc., is it last one year or 3 years or 5 years or more?

3. Extrapolating recent past into the future – assuming what has happened in the last one or two years will carry on into the future. More likely this comes from the expectation of “easing into” an investment i.e., “after I invest I want the value to go up”. This doesn’t allow for investing into something where the trends don’t look like they are heading up anytime soon. No one wants to “wait” to get a return. I call it the “meter-down” mentality for obvious reasons.

4. Fixation and reliance on what the media, intermediaries, digital data sources, office friends, and neighbours are citing as top performers; unmindful that they are talking about what has passed and not what is likely to come up.

5. False attribution – what has declined in value in recent times is not safe and what has gone up is safe; drawing inferences and making attributions about the goodness of investment basis their price movements and allocating to those instead of thinking about future potential and journeys of investment options

6. Excessive focus and over emphasis on individual investments as opposed to overall portfolio or asset allocation and its objectives

7. Underestimating time horizon of investment and overestimating need for liquidity resulting in pre-occupation with short term success of investments rather than long term gains. Long term investor when cutting the cheque but keeping score and drawing conclusions on winners and loser every day.

Enough theorizing based on my experiences, let me share an actual incident that occurred with me in front of a client. These are the instances where one gathers insights into thought processes. This was in January 2018; due to certain escalations and unhappiness at the client’s end our customer service team fixed my meeting with a client from the Mumbai suburb of Andheri East. The gentleman would have long and sometimes abusive conversations with hapless customer service and investor relations personnel at our end. The issue was that one of the banks had referred this client to invest with Motilal Oswal AMC in the Value PMS in June 2015. (Value PMS is pre-dominantly large cap strategy with track record since March 2003 of 22.56% CAGR and about 5% compounded alpha since inception over Nifty50 TRI).

When I met the client in mid-January 2018, he was furious because his investment in Value PMS after about 2.5 years had appreciated at the rate of about 30% absolute. Anyone reading this in today’s context might feel it’s not a bad outcome. But no Sirs, back then it was “disastrous” performance just as any small and midcap performance today would be rated “disastrous”. And what was the reason for displeasure? It will sound funny, sad and ironic right now but his neighbour, his neighbour’s PMS Manager and his own research told him that he had been “cheated” by the banker and the AMC. His neighbour had invested in a small cap PMS that at that time showed a 72% absolute appreciation. His “research” on our own website told him that we had another PMS called IOP which itself was up well over 65% in one year prior to our meeting. And probably the banker and everyone including us had some vested interests whereby he was made to invest in a large cappish strategy when the small and midcaps were bursting all the charts.

In my meeting I tried to contest his conclusions about his investments, about his banker and about us. But nothing worked and despite my best attempts he redeemed on January 25, 2018.

One of the things I learnt in that meeting is that human minds are not geared to handling equity investing challenges. The human mind wants definitive conclusions, explanations and basically we need “closure” on everything so that the mind has “slotted” everything comfortably in its quest for peaceful existence as good, bad, black, white, right, wrong etc. etc. Unfortunately, equity investing is a journey with a score-board but practically no end game to it. If you are an equity investor there are only contexts, perspectives, and opinions and evolving situations, there are no definite conclusions. And the human mind cannot handle that; which is probably why F Scott Fitzgerald is quoted to have said; “The test of a first-rate intelligence is the ability to hold two opposed ideas in mind at the same time and still retain the ability to function.”

The other interesting learning is that when markets are booming investors seek relative return – “better than the markets and better than the best”. When markets are in doldrums investors seek absolute return – “how can the value go down! I didn’t invest to lose money!” My practical experience tells me that in bad markets you should gain alpha – that’s what makes a portfolio stand apart from the rest and in good markets you should be happy with beta so that in one cycle you are significantly ahead of the market.

Coming back to my interaction with the investor and why the need for definitive conclusions even in short time periods is harmful, I performed a “what-if” kind of analysis few days back when I decided to write on this topic.

The pendulum had swung so far in favour of small and midcaps in January 2018 for the whole of 2017 we stopped subscription to our flagship midcap strategy NTDOP and around the time I met this client we even closed subscription to IOP (admittedly late and could have been done earlier – all in hindsight of course). Not that these investors will not make great returns; it elongates the period of holding and makes the journey unpleasant in parts for all of us. As I said before since everyone overestimates need for liquidity and underestimates time horizon of investment – a dent in the first 2-3 years is extremely unwelcome event and likely to drive a huge wedge between the ultimate return on the investment and the return that the investor would likely get. 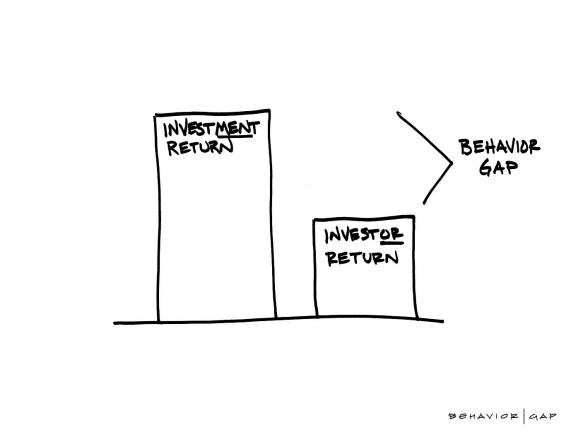 The pendulum had swung so far in favour of small and midcaps that a 31% absolute return in 2.5 years made one feel way laid off his entitled path to wealth creation. Conclusions were drawn, winners and losers were declared and actions carved out as if equity investing is a cricket match where the last ball had been bowled.

In the very same vein maximum investors invested in mid and small cap in 2016-17 and the advice to invest in large caps was not a bad one. But in the first couple of years of journey the ones in large cap bailed out as can be seen from my story only to look to bail in later in 2019!!! 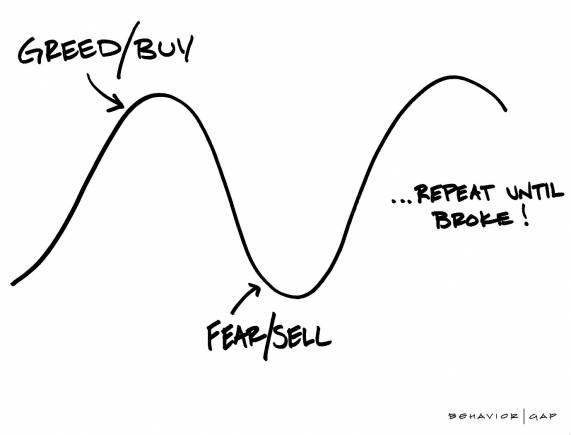 Finally, let us see does it pay to “pick the winners” when we look to invest. The data presented below shows what happens if you consistently pick the winner of the last 1 year and last 3 years for your investment. This analysis is presented on a universe of 20 multicap funds. What you will notice is that the correlation between top rankers of the past 3 years or 1 year with future top rankers in the next 3 years or 1 year is practically negligible. 1 year and 3 years are taken in this analysis because equity flows into investment products by investors are highly correlated to last 1 year and last 3 year rank – but well future performance is not correlated to rank which means that the return that the investment makes is not the return that the investor gets.

Investors are perpetually chasing what did well in the last 1 and 3 years even as they actually have to live the journey for the coming 1 or 3 or more years. 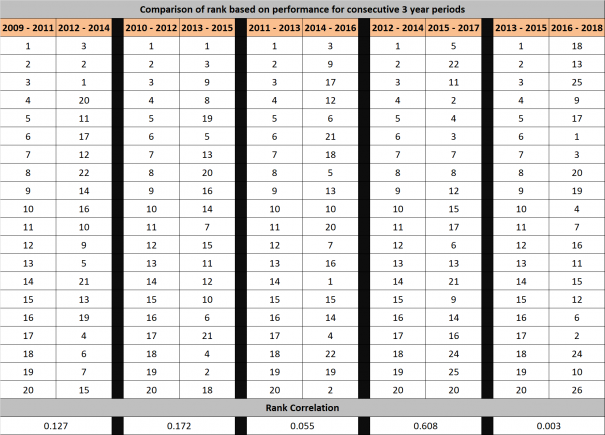 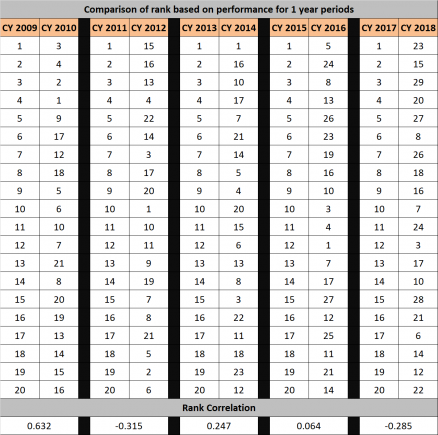 When investing in equities do not practice rear-view mirror driving. When identifying investment opportunities definitely short-list winners of the past but before committing please understand what contributed to the success in terms of investing approach and market conditions and what will result in sustaining the performance during your investment tenure. If market conditions make you believe that a strategy different from those of the winners will work then look for portfolios that have those ingredients. And if you are someone investing for your long range future over 5-10-15-20 years then don’t be overly worried about winners and losers of 1 or 3 years – ensure style diversity in your portfolio and then remain invested without reacting to near term developments.

Preview: RBI seen cutting rates, but it will be a close call